Marco Alverà, the CEO of Snam and the President of GasNaturally delivered a keynote speech at the opening of the Annual Conference of Gas Infrastructure Europe (GIE) on 13 June in Paris.

The opportunity of decarbonisation lies in the convergence that is happening between gas and electricity.

“Hopefully we will be able to put an end to the cold war between electrons and molecules and begin physical interconnection of our systems. In Italy we are looking at how to put electric compressor stations in place of our gas compressor stations. This could allow for a hybrid system where the excess renewable electricity is being absorbed, and the line pack of the gas grid is being used as a big battery” – Mr. Alverà explained.

The integration of our systems will happen at the storage level

Storage is an area that will require the most efforts from R&D, as well as technology and business cooperation, according to Mr. Alverà. “Places like California can target 90% renewables with the batteries covering for the night. In Europe we have a system where we consume six times more energy in the winter than in the summer. We also see that climate change is actually driving the energy demand growth because the peaks of cold and hot weather require more energy than before - and this is not the normal baseload increase, these are the peaks that are increasing” – Mr. Alverà explained.

“The most urgent need for integration is at the storage level - whether through power-to-gas, hydrogen, or a blend of hydrogen and methane. This where the industry should focus its work” - the President of GasNaturally stressed. He also brought up an example from southern Italy where Snam tested a 5% blend of hydrogen at the level of final users – a pasta factory and a mineral water factory. “The results were very positive – their burners actually performed better on hydrogen. The initial idea is to align the regulation and increase the general acceptance of such processes, and later to further increase the volumes of hydrogen blend up to 10% and more” – he explained. 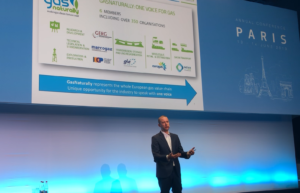 Mr. Alverà closed his keynote with a call to action to GasNaturally members and partners: “As GasNaturally we represent the whole European gas value chain – we speak with one voice and have developed one aligned narrative. The next 18 moths will be a crucial time for our industry. It is the time when we will stand together to convey the advantages of gas towards the European consumers and policymakers.”